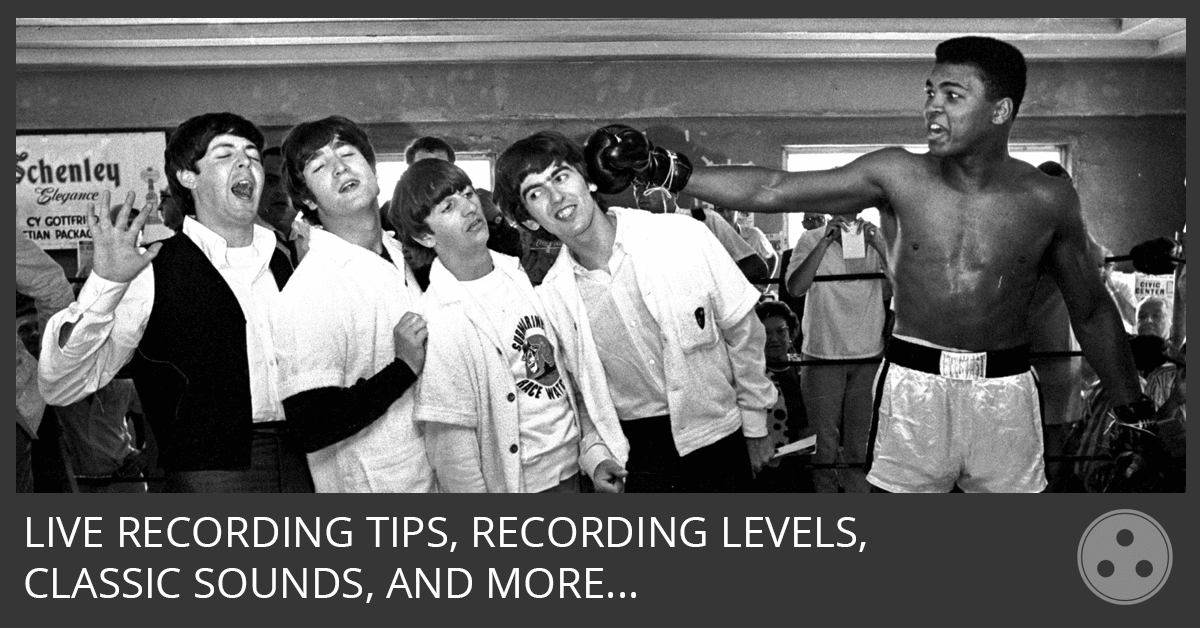 Loads of questions have been coming in about recording audio in Logic Pro.

Today I decided to take some time out from my busy recording schedule to answer them.

With a little help from my friends…

Question: What are the proper levels I should record with?

Answer: Doing things “proper” can get you into some fights in the studio. After all, discoveries are often made when rules are broken. But there are some generally accepted best practices.

The “straight line” approach means you record the signal at the level it will be played back. So a kick and snare will be recorded pretty hot while a string section and synth pad will be recorded lower.

The main reason for this is that you can set all the faders at 0 dB (unity gain) and the balance will be close to how it should sound in the final mix. A lot of tweaking won’t be required and you can hand it off to another engineer and they’ll get the basic idea right away.

The other benefit is that the most clarity will be saved for the instruments that need the focus. Think of a photograph. Only a few objects are in perfect focus and the rest of the picture will fade into the background.

One more thing, keep peak levels below -6 dBFS. Snares, kicks, and vocals (your loudest instruments in popular music) should peak between -12 and -6 dBFS at most. Save that top 6 dB for the final mastering process.

Question: How do I get classic tones like The Beatles (or other classic artists from yesteryear)?

Answer: That’s an excellent question! A lot has been written about The Beatles’ recordings. You could always try to recreate their signal chains with the same instruments, the same gear, and in similar sounding rooms. But that’s probably not the answer you wanted to hear unless you’re made of money.

There’s a couple things I have to say to that. First, the sounds of yesterday won’t get you hired today. The Beatles will never lose their status as one of the best. They created several desert island albums. But tastes and listening practices change and we make and listen to music differently now.

Principles have mostly stayed the same. Find a great audience, write great songs, get great sounds, make it interesting, and profit. But gear has changed and so have the audiences. So be inspired by The Beatles but don’t copy their tones.

Which leads me to my next point. If all you had was a computer and Logic Pro, you could make a recording destined to be a classic. You don’t need any external gear to pull it off. It’s probably harder than ever, if not impossible, to pull off a Beatles-sized legacy. But today’s artists have all the tools necessary to build a successful career and make a satisfying artistic contribution.

So be inspired by the best, dream big, and have a strategy that builds your dream step by step. Your strategy has to accept that you’re living in today’s world and the world is changing fast. You can do it!

Answer: That’s a great question. I think it’s important to separate it into parts.

Recording audio almost always involves live instruments. There’s rarely a need to record the audio of software instruments since you can just bounce them in place if you need an audio file.

However, you will need to record the audio of external MIDI instruments before you bounce your final project. I like to do that as early as possible so I’m dealing with everything “in the box” and not managing the complex web of relationships that gear can have.

MIDI allows you to have flexibility. The downside is you can avoid making decisions until later. So I try to commit to a part as soon as possible and record it as audio. Speed is the best friend of productivity.

Enter your first name and email address and click the “Get Access Now!” button to get your free guide.

2 thoughts on “Record Better Than The Beatles”

Enter your first name and email address and click the “Get Access Now!” button to get your free guide.